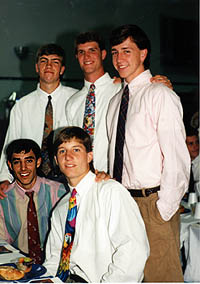 Kevin was a leader, a role model, an athlete, a scholar, and a friend. He grew up in Riva, Maryland with older brother Kurt and their parents, Karl and Carol where he attended Central Elementary and Middle Schools and played sports in the Davidsonville Athletic Association.

In 9th grade, Kevin transferred to Saint Mary’s High School in Annapolis, where he quickly became an integral part of the school community. Kevin was a four-year member of the varsity lacrosse team and three-year member of the varsity soccer and basketball teams and was elected as Captain of the team in all three sports in his senior year. He was a member of the National Honor Society and in his senior year was elected Student Body President. In 1993, he received numerous awards including The US Army Reserve National Scholar-Athlete Award, St. Mary’s Outstanding Leadersip Award, St. Mary’s Student-Athlete Award, and was chosen as 1st Team All-Metro , 1st Team All County , USILA All-American, and participated in the North-South National All-Star Lacrosse Game. 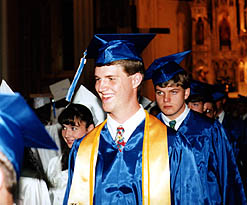 His academic and athletic success continued at The University of North Carolina – Chapel Hill. Kevin was named to the Dean’s List in 1993 and 1994 and the ACC Honor Roll. He was a member of Athletes in Action, team representative to the Athletic Director’s Student Advisory Council, a peer mentor for Carolina Athletes Coming Together, and a Varsity Lacrosse Scholarship recipient. Tragically, Kevin’s life was cut short during his sophomore year when he was shot in a random act of violence.
In his 20 years of life, Kevin had touched many in a profound way, such that his friends and family thought it important to carry his spirit forward. To this end, The Kevin E. Reichardt Foundation was formed.

The mission of the Kevin E. Reichardt Foundation ("KRF") is to promote, foster, and further the academic, personal and professional development of young men and women who embody the positive attributes and spirit of Kevin E. Reichardt.